Stuttgart/Berlin. On 2nd October, German Finance Minister Hans Eichel will be bringing out the country’s new welfare stamps. The theme of the 2003/04 set of stamps is linked to last year’s successful veteran car series. It is made up of five individual stamps each showing German classics from automotive history, with a Porsche type 356 B pictured on the 55-cent stamp. The finance minister will ceremoniously hand over the new stamps to German President Johannes Rau, in his capacity as patron of the Welfare Stamps Association, at Schloss Bellevue, the president’s official residence.

A nationwide campaign to inform people about the welfare stamps is being supported financially by Dr. Ing. h.c. F. Porsche AG of Stuttgart. As a result, the Porsche 356 B will feature for several weeks as the main image on around 12,000 billboards, over 100 video screens in underground stations and on further posters in more than 30,000 social welfare establishments right across Germany. Dr Wendelin Wiedeking, Chairman of Porsche AG, said that his firm was getting involved due to the strained financial position of many social welfare organisations: "It’s precisely at times of reduced public funding that social welfare institutions in our country rely more than ever on the income they get from the sale of these special stamps. We therefore decided to work in partnership with the Welfare Stamps Association, and we hope that our sleek sports car will inspire as many people as possible to pay what is a relatively small amount for these lovely stamps."

Organisers of Germany’s voluntary welfare community are also hoping that the catching Porsche motif will create great awareness and that the special place that this sports car classic has in people’s hearts will lead to a corresponding sales success.

The Porsche type 356 was built from 1948 to 1965 and rates as one of Germany’s first post-war sports cars. Porsche introduced the 356 B at the Frankfurt International Motor Show (the IAA) in 1959. With a 90HP engine, the car was capable of a top speed of 180kmh. With the 356 series, Porsche established its philosophy of developing and building sports cars that stand out for their superior technology, exceptional quality and unmistakable design.

The proceeds from the surcharge of 20, 25 or 56 cents on each welfare stamp sold benefit the social welfare work of the Workers’ Welfare Organisation, Caritas, the Equal Rights Welfare Association, the German Red Cross, the ‘Diakonie’ church welfare association and the Central Welfare Office for Jews in Germany. An extremely wide range of projects is supported. These include providing aid for kindergarten and youth clubs, supporting the old, sick and disabled and assisting victims of war and natural disasters. Since 1949, a total of around 3.7 billion welfare stamps have been sold, with a surcharge value of over 520 million euros.

The new welfare stamps will be available at post offices from 9th October 2003 until the end of January 2004. They will also be available all year round from social welfare offices, voluntary welfare associations and the shop at www.wohlfahrtsmarken.de. 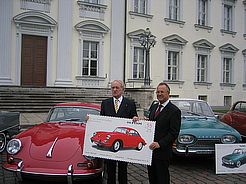 P04_0097: Federal Minister of Finance Hans Eichel (r.) presents the first edition of the charity stamps 2003/2004 to Federal President Johannes Rau on October 2 at Schloss Bellevue in Berlin. The picture shows both politicians with an enlarged 55-cent stamp in front of a Porsche 356 B.
2003/10/17

Federal Minister of Finance Hans Eichel (r.) presents the first edition of the charity stamps 2003/2004 to Federal President Johannes Rau on October 2 at Schloss Bellevue in Berlin. The picture shows both politicians with an enlarged 55-cent stamp in front of a Porsche 356 B. 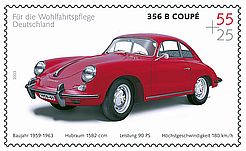